Michael Obay promoted to National Consultant on Wednesday August 27th.
We congratulate him on this remarkable achievement!

“It’s the first bill you pay every month, and the one bill you can’t pay off!” says Michael Obay, Staten Island resident and Executive Consultant.

As a successful franchisee with three ice cream stores, among other businesses, Michael had been approached many times with network marketing opportunities. As a businessman, he could understand the power of leverage in building a multi-level marketing organization. What he wasn’t interested in was trying to sell a product.

“Most of them (network marketing opportunities) offer products, and I don’t like changing people’s buying habits, so I stayed away from them. When I saw this – as a service - I realized that I could get paid a residual income every time someone paid their gas or electric bill. That’s what got me excited the most.“And he also liked that fact that he wouldn’t have to resell anything either.

The business that almost wasn’t
We should back up one step. Michael understood all this after the second time he was presented the Ambit Opportunity. Michael’s experience as a prospect is the classic example of what you should and should not do when contacting prospects.

The first time he was approached, he didn’t see any of the possibilities. He’s not even sure he knew what Ambit was about. Why not?

“(The first Consultant) did exactly what we teach people not to do and he gave me a presentation over the phone. He gave me so much information. I was totally confused.” Michael was already working 110 hours a week, and had no time for a presentation over the phone. He passed without giving it a second thought. What was different the second time around a year later? It was the approach from his best friend and Senior Consultant, Nick Patterson.

“Nick approached me one day and said that he and his wife had started a new business. As I was his best friend and a business-owner, he wanted my opinion whether it would be a good business move for him and his family. So he invited me to take a quick look at a website. I watched the presentation, and took some notes. It blew my mind. I called him back the next day, and asked him if I could do this too.”

Becoming a master inviter
Nick’s approach allowed Michael to see the vision, but he still had a problem. He was already working so many hours. At best, he could devote maybe two to five hours per week. How to allocate those few hours? Nick Patterson had already shown him how in a nutshell – become a master inviter.

His first move was to attend training and learn the Ambit Fast Start system. Not coincidentally, he learned to do exactly what Nick Patterson did. He created his written list, and then he invited everyone on that list to take a look at the business. He used his Ambit personal website, the DVD and Opportunity Meetings. If necessary, he followed up with a three-way call to the likes of Ray Montie or Brian McClure.

“I knew I didn’t have much time, so why am I going to try and give a presentation over the phone? I already knew that didn’t work, and I’m the perfect example. It’s easier for me to have a guy like Ray Montie, for example, do a presentation for me. So I did a lot of inviting over the telephone.”

This simple, duplicatable process worked so well that Michael promoted himself to Executive Consultant in just 11 months.
Seeing his wife and kids again
So let’s get back to that little matter of working 110 hours a week. You read that right. Between managing his franchises, a mortgage company, and a credit repair business, he worked 16 hours a day and 7 days a week. He would go days at a time, he confesses, without seeing his family.

Needless to say, when you ask Michael questions about his goals and expectations for his Ambit business, his answers all seem to circle back to one subject – his wife Christine and his kids, Kayla, 5 and Michael, 3. They are his only “why” for building his Ambit business.

You might also guess that Christine wasn’t happy with Michael’s plans to start another business. Michael says she was “unsupportive” in the beginning. But working the business part time for a few months, Michael began to replace his income at the same time he was recapturing his time. She agreed to accompany him to Ambition 2008. Michael says she became very supportive once she experienced the power of Ambition. Michael was able to close the mortgage and credit repair businesses, and sold one of his ice cream stores. (He has since delegated management of the other two.)

He’s working his Ambit business full-time; nothing close to the 110 hours he was putting in every week. Christine has become Michael’s business partner, and the Ambit Opportunity is now a family affair.

Advice for new Consultants
Plug into the system and get trained as soon as possible. As Michael learned from the very beginning, the system in place does work. Don’t reinvent the wheel, just become a good follower!

“I equate this to my ice cream business,” he says. “When I opened up my first franchise, they required me to go to training. I learned how the business works first. I look at Ambit in exactly the same way.” He strongly believes that consultants who sign up in the business and don’t make training their first priority are setting themselves up for failure.

In turn, he believes that leaders must make sure their people are trained. “It’s so important to get people trained as soon as possible.” He feels the more time and effort you invest in getting people to training and events - especially in the beginning - the more successful they will be. In turn, your success will follow.

The future
Michael plans to make National Consultant by Ambition 2011, and build an organization successful enough to “retire” in three years. At age 35, that would be quite an accomplishment. Even so, he says, he could probably never stop building his Ambit business.

“I’m addicted to this Ambit thing,” he says.

How about that. So are we Michael. Stay energized! 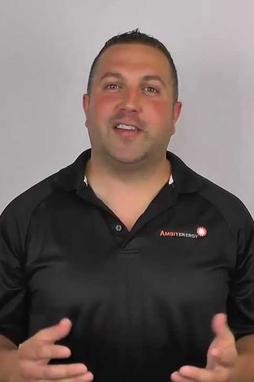