You only have so many 10 year increments

Nobody can beat free

Marc and Christina Alfano both came from families of entrepreneurs and knew that they would follow in their families footsteps, especially Marc’s mom who also worked in network marketing.

Around the same time changes in the economy caused them to lose their restaurant, Marc and Christina found out they were unable to have children, they spend several years moving frequently.  Things started to turn around when they received an opportunity to be a personal chef for country singer, Kenny Chesney.  While working for him an impromptu visit from a friend led to an offer from Heinen’s Fine Foods.  Heinen’s wanted 17 of their stores stocked with Marc and Christina’s prized tiramisu and they quickly launched Christina Maria’s Tiramisu.

Marc and Christina were impressed by their first meeting.  “I was totally impressed with the transparency of Jim Mason. He made me dream again,” Marc said. But, there was one thing missing. Why were theystarting another business? They didn’t have a why that night, but quickly found out the next day. “We got our ‘Why’ the next day. We found out we were pregnant and having a son,” Mac said. The two considered Ambit a gift from God just like the gift of their son.

There are many of the Alfano’s achievements worth noting. They’ve received the SC Dream Team award and the Pure Energy award. The Comma Club is another one, but even with all of the success it wasn’t always an easy road. “We had a mix of reactions from friends and family. That’s okay. Not everyone gets it,” Christina said.

There was a point where they almost quit. They even called to cancel their website. “They told me that I’d paid for the website the day before, so I decided to give it another shot,” Christina said. That other shot led to their move to the next level in six days. That phone call to cancel the website was quickly forgotten as they started their climb to the role of Executive Consultant.

The Alfano’s believe their story isn’t special or uncommon. They use their road to EC to inspire their team. “Becoming an EC is an asset to them because it proves it can be done. If we can do it, then they can do it too” Marc said. 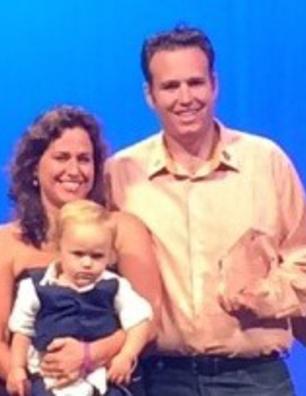 "Don't force it. Get a larger hammer."