"To be the man, you gotta beat the man!"

In this episode Kirk Horan discusses how as a young man, he lived beyond his means and had a serious health condition that changed his life. Now, thanks to Ambit Energy, he will be retiring mid 2016...

As a career firefighter in Johnstown, NY, Kirk Horan has seen plenty of danger. But the biggest obstacles he faced over the past few years weren’t four-alarm fires.

“I had seven years on the job when I was diagnosed with an aortic aneurysm,” says Kirk. “I was only 31, and they told me my career as a fireman was over and I could die.”

When they got the news, Kirk’s wife Trisha was a stay-at-home mom, caring for their sons Justin and Adam – who was only four days old.

“This turned our world upside down. As a fireman, I have always worked two or three extra jobs to have the things we had. When that second income was lost, being out of work, we were building a load of debt.

After a 12-hour surgery, it took Kirk a year to recover. The fire department allowed him to come back, which thrilled him: “This was always my dream job!”

BACK TO WORK…AND WORK…AND WORK
Due to his long layoff, Kirk had to find a second job. “I went into trucking part-time, that’s what I did before becoming a firefighter. That’s how we were “maintaining” my bills.”

Then, three years after his surgery, Kirk was working another side job when he fell off a roof headfirst and broke his wrist.

“I was out of work again for four months,” he recalls. “When I healed, I came back to both firefighting and trucking.”

Three years later, Kirk was out snowmobiling and hit a tree at over 50 miles per hour. Once again, he was out of work with serious injuries and “in a panic” about returning to firefighting.

JUST WHAT HE WAS LOOKING FOR
It was another firefighter in his department that asked Kirk to go to a Business Presentation. Ambit definitely was an interesting opportunity for Kirk: “I was so eager to go, I picked him up!”

Interestingly, the fireman who invited Kirk passed on the Opportunity even after Kirk told him that he would sign up under him.

“I was very excited about making money by helping my family and friends save money on their bills,” declares Kirk. “And the compensation I could earn was even more exciting! I felt like I had found what I was looking for.”

GETTING STARTED AND ACHIEVING RESULTS
Initially, Kirk was hoping to make an extra $500 per month. “I couldn’t wait to share the Opportunity with everyone. In just 18 months, Ambit has far exceeded my expectations!”

His family and friends are proud of Kirk’s success, although some of them are a little envious. “Most of the guys from the fire department who are now in the business say ‘I wish I would have listened to you the first time – I’d be much farther along!’” “I remember dreaming of more and more residual income – and with what I’ve been able to accomplish so far, I can only imagine what the future will bring!”

MAKING OTHERS BELIEVE
Kirk works his Ambit business part-time, and proudly continues working with the fire department. “I really love my firefighting job, but even if I don’t get out of bed my residual income pays me more than going to work. And of course, I really enjoy helping others change their financial future!”

His friends and family have always been supportive, and were “more than willing” to become Kirk’s customers.

“A lot of people waited to see what I did,” he says. “My co-workers said I was going to jail – but now, nine of them are Consultants!”

A GREAT TEAM AND GREAT SUPPORT
Kirk is proud of his entire organization – “All of my success is due to my team.”

“I want to send a special “thank-you” to Senior Consultant Tiffanie Wood, who was instrumental in getting me started the right way,” says Kirk. “And the five SCs who helped me promote: SC Bobby Varin, SC Eric Pantalone, SC Ed Leslie, SC Perry Paul, and Fast-Track promoter SC Brian Pokorny.”

He also thanks NC Ray Montie “for being my mentor” and NC Brian McClure for providing “incredible support!”

A BRIGHTER FUTURE
At home, Kirk looks forward to giving his wife and children “a life we could only imagine before Ambit.”

With Ambit, Kirk’s goal is to help anyone who wants to succeed to go out and achieve it. “My advice to new Consultants: Follow the system that our leaders have given us to the “T,” and you’ll experience success. Never give up!”

“I foresee many people achieving financial freedom, and I can’t wait to see where the Ambit Opportunity is going to take us.”

And for someone who’s overcome as many obstacles as Kirk Horan, the future is brighter than ever. 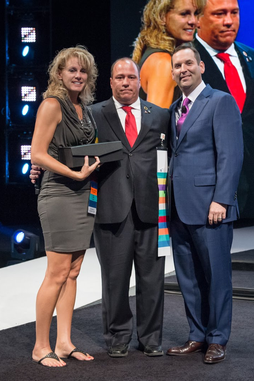